I feel we have been neglecting our duties as bloggers...

Hello again, it's Robyn this time, I have been made aware that the switch between myself and Flatley caused some confusion last time. Apologies.

Since then we've been much more adventurous than Ueno park. We went to the Beer museum not long ago, which was utterly fantastic. We tried a 'taster set' which had four half pints of beer (Weiss beer, 'the black', Ale - "popular in Britain" and Yebisu beer) and a packet of beer crackers which flatley is now addicted to. We also tried Beer Chocolate, which is a lot like Chocolate, but with a very slight beerey aftertaste that is not unpleasant.

We also went to Yoyogi Park and saw two Japanese weddings taking place in the Meji Jingu shrine. All very solemn, but the clothing they wear is really beautiful and it was a nice day for them to be out. The shrine is very close to a huge market street called Takeshita-dori which is amazing (I felt bad being there without Donna) and has loads of stalls and shops and places selling food. It was here that we ate the best Crepe known to man. For a mere two pounds, they will sell you a slice of cheesecake, covered in cream, covered in chocolate sauce and then wrapped in a crepe. Most of it goes all over your face, but it still tastes amazing.

On Tuesday we got up at 5AM and headed to Tsujiku Fish market to see what we think was tuna being auctioned off in a huge hall. There's also a massive market just nearby that has every kind of sea creature imaginable for sale. You have to be careful though, as there are men pulling huge slabs of fish everywhere on these half moped half fork-lift truck contraptions. They do not like to break unless absolutely necessary and travel at a speed that requires you to be paying attention.

We have also seen some beautiful Cherry Blossom (which we thought we would be too early in the year to catch) and today went to Hanoke to see the mountains. It was really nice to get out of Tokyo for a bit and not be surrounded by huge buildings. Unfortunately it was too cloudy to see Mt. Fuji, but we did go on a really cool boat cruise on a pirate ship, so the day was not a complete loss.

That's all for now, and possibly all for Japan as we leave on Monday and have proved that regular blogging is not really our style...

Love to one and all

Any day involving a Panda is a good one...

If you ever choose to go to Tokyo, come to Ueno. The entire district is incredible. Ueno park is huge, leafy and holds Ueno Zoo, the Tokyo Science Museum, the Tokyo National Museum, the Met art Museum, the Museum of Western Art, dogs dressed in Adidas tops, spitting Russians, temples, midges and cherry blossom trees. The zoo was our main port of call, and we got around it all in three hours, a visit including the usual zoo fare - pandas, elephants, an angry looking tiger, various hippos and a crocodile - as well as lots of little other critters and several boatloads of excitable Japanese primary school kids.

After that we walked around the park, There are some beautiful temples here, and it is weird to be confronted by a Confucian (sp?) shrine bordering a vending machine selling ice tea and icecream. I bought a cheap, rather silly t-shirt from a flea market near the central fountain the park, mainly for the attempt some designer had made to put across some poignant thought on memory but using very broken English. Please do not remind me that my attempts to do anything of the kind in Japanese would be catastrophic, as this would make me feel bad about myself and my purchase.

Just outside of Ueno Park is the Ueno district, starting with the posh 'atre' and 'oidi' shopping malls and broken up with streets part Camden Market, part designer goods, part retail chains. There's a lot to look at, and while eventually the same stuff crops up - lot's of small diners, bag shops - there's some real highlights here. Mainly the adverts for the fourth floor strip clubs promoting, in neon letters, brand names such as 'Splash Mountain', 'Slot Wonder Girls' and, ah, 'FST!'. Charming. The district isn't dirty, or to put it another way, particularly red-light, but if you go seeking, you shall find. We weren't actually seeking - I was looking at hats, but a giant neon sign saying 'FST!' is hard to ignore.

We then went to Roppongi again, and looked around the Roppongi hills area. Seriously highbrow, high budget stuff here. Very sanitised. A bit like golden soap - nice to look at, but not really for us to use and probably not very practical.

Analogies are not my strong point.

For supper we ate at a small restaurant near the hostel in Minowa. Robyn did not lose control of her spoon this time, which is good because this one looked heavier and wold have caused carnage. Now while very nice, I think being vegetarian in Tokyo is a lot harder than most of the guide books make out, mostly due to the language barrier, and secondly, those who wrote the books probably weren't vegetarian themselves. If you can't read Japanese, you are relying on pictures of the food, or, if available, the English descriptions, and three times in two days I have picked options that have either looked vegetarian and found beef sunk at the very bottom in sauce, or been described as vegetarian - ie cheese and vegetable stew - only to find no, there's beef here too. Even the plain noodles at the zoo had beef and fish at the bottom. Now I haven't actually eaten any meat, and am happy just picking it out, but it's a little frustrating. I haven't checked the water bottles yet for fear of finding traces of cow juice. It's like being back in Ireland...

I wouldn't get used to frequent updates, but i thought seeing as how our last entry was nonexistant i should maybe reassure you (specifically Kate) that we are not dead.

We made it to Tokyo and have done lots of lovely and exciting things. we went to the Sony centre which is uberly cool and has the worlds most complicated toilets in them (i may have taken a picture for your viewing pleasure at a later date) and saw a badass statue of a samurai.

We had groovy soup, but it is muchos muchos windy here, and whilst eating i momentarily lost control of my spoon and it was hurtled through the air into Flatley's lap. Probably not a good start. Flatley has had to pick pork out of his soup, as we were misled by the sign outside the shop. His japenese was excellent in asking about veggie options, but it turns out that the 'vegetable and cheese' soup has a secret ingredient of beef so he had to settle for something where he could pick the offending meat out.

Tomorrow we're going to go to Ueno park with a nice girl from south korea who we met near the Imperial Gardens and who was just as lost as us. There's a zoo in Ueno park, so we hope to see Pandas :D

All Packed and Ready to go

Five minutes until we have to leave to go to Heathrow, first entry in the blog is done and i've got my money and my passport :S 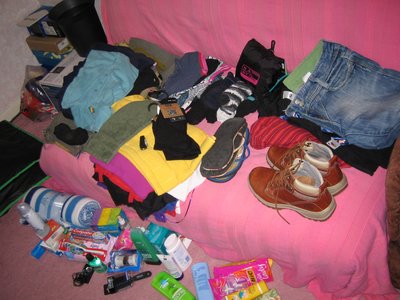 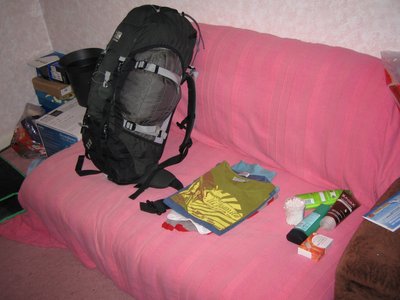